How Should the Story of Inception End?
By
Jau-lan Guo

Widely known as one of the first-generation contemporary artists of Taiwan's post-Martial Law era, Yang Mao-Lin, a key member of the Hantoo Art Group, serves as an ideal example of how an artist has committed himself to socially-engaged art practice. His body of works brings forth questions as to how individual subjects may respond to or engage in collective consciousness: does one simply insert oneself smoothly into social processes in hopes of driving the society forward? Or does one concentrate on the inner awareness as a means of avoiding or even defying the immediate crisis? Or perhaps, as one seeks to make sense of the external world, the “evil powers-that-be” that the individuals have been fighting are swiftly and quietly evolving from the mighty inflictor of perceivable social-political injustice to the ever-proliferating commodity culture? Under these circumstances, one may begin to think, perhaps digging into one's own consciousness, albeit seemingly passive or even reclusive, may in fact be a more effective way of engaging with the increasingly complex and dynamic social reality.
Yang Mao-Lin first made his name in Taiwan's contemporary art scene in the 1980s with his two pieces – The Truth (Plate 1) and the Made in Taiwan series. This period is marked by an explosion of debates over the island's national identity and “Taiwanese subjectivity”. Whereas the Made in Taiwan series makes a stance against the national collective memory by juxtaposing a number of powerful historical symbols, The Truth, which appears to blow a raised fist at the viewers, may instantly evoke impressions of some left-wing or feminist activist posters, such as the Taller de Grafica Popular of Mexico (Plate 2) and the Stop Draft Week (Fig.) of the anti-Vietnam War protest movement in 1968. All these images strike the audience with the depth of focus and power of the message. 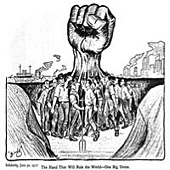 In the wake of democratization and localization movement in Taiwan's post-Martial Law era, Yang Mao-Lin and his contemporaries embarked on a quest to explore their relationship with Taiwanese art history, and at the same time to discover and develop Taiwanese identity through visual art with the support and endorsement of a newly emerging art scene shaped largely by the combination of the art market and the museum/gallery system.
An artist may appear alone and fragile when facing up against the immovable wall of authority, but the striking contrast may inadvertently help to enhance the image of the artist as a hard-edged hero forever poised to throw a fist punch at the mighty authority. Yang Mao-Lin's earlier works may indeed be characterized by a strong militant political tendency. However, as the new millennium approached, the artist seemed to take a more personal, lyrical turn, opting for a more flexible aesthetic approach as he moved away from the confrontational tone in favour of a subtler, or even cunning, aesthetic strategy. His post-millennium works, such as The Sword-holding Great Devil Vidyaraja (Plate 4) and Astro Bodhisattva (Plate 5) can be seen to exemplify how Yang Mao-Lin focusses on the symbolic framing of his dissenting vision in attempts to stretch cultural boundaries, and the works exhibited in Temple of Sublime Beauty: Made in Taiwan, which represented the Taiwan Pavilion in the 53rd Venice Biennale in 2009 the summit of this creative endeavour. Invited by German curator Dott Felix Schoeber, Yang’s sculptures of Eastern hybrid deities (Plate 6), A Story About Affection – Extraordinary Love Vajradhara (Plate 7), A Story About Affection – Beloved Mermaid Vajradhara (Plate 8) and A Story About Affection – Beloved King Kong Vajradhara (Plate 9), invaded the Saint Giovanni e Paolo Church, the oldest and holiest Catholic church in the city, with their noisy manifestations of religious-cultural hybridity.

Surprisingly, dismissive reactions of the religious establishment against this curatorial arrangement and subsequent confrontation between art and religious faith, East and West, sacred and profane, did not happen as it had been expected. According to curator Dott Felix Schoeber, the local Catholic clergy simply regarded Yang's sculptures of Mazinger Z or Peter Pan as interesting works of art which would pose no threats whatsoever to their faith in God: “What Jesus Christ has been through was far worse than simple expressions of dissent. He was crucified on the cross; a few wooden statues will not make him fall off the cross again.”

It was, ironically, the servants of the secular public administration who cried desecration when presented with the curatorial proposal of Yang Mao-Lin's exhibition. The Venice municipal agency in charge of preserving cultural heritage reacted with disapproval, stating categorically that the achievement and cultural-historical status of the Renaissance is beyond the reach of any living artist. It was therefore decided that there would be no mimicry of any statues near Scuola Grande di San Marco or any of the marble statues of the saints on top of the church roof of SS. Giovanni e Paolo. It seems that instead of breaking down a whole system of signifiers and codes, Yang Mao-Lin's latest works, by putting together various different kinds of realities, simply softened the rigidity of the system as they infiltrate the subconscious of the public and alter its ideological contents. Such an artistic tactic may appear subtler, but by no means is it any less effective or less fascinating than attacking the system from the outside.

As discussed in previous paragraphs, Yang Mao-Lin's artistic style has undergone a major shift in the last decade from a confrontational to a more cunning, debilitating approach. This change calls for comparison with the Hollywood blockbuster movie Inception (2010), in which the main character Dom Cobb enters, and plants life-changing ideas in, the dreams of his targets as he also tries to heal his own mental wound. The act of infiltrating one's dream may be a gentle one; the subversive power lies in the idea itself. As Cobb in Inception puts it, “An idea in your subconscious can rewrite all your rules of living.”
On the other hand, however, while on of the most captivating object seen in the film Inception is a spinning top which Cobb uses to distinguish between reality and dream, Yang Mao-Lin does not appear to offer a marker of boundaries of this sort in his works. As far as the artworks are concerned, if there is such a thing which marks the inside from the outside, or dream from the reality, it would probably be the “white cute” i.e. the mechanism of art exhibitions. Once inside of the white cute, one can just do as one wishes.
Sometimes it is hard to reach a satisfactory conclusion as to what has driven an artist to change his direction – social-cultural factors, inner impulse, or personal growth. In the case of Yang Mao-Lin, all that we know is that he has, in the past, confronted and challenged the institutional system of power with strong-impacting images, but is now choosing to shift the boundaries of reality through creative visualization which promises an ecstasy of expanded consciousness.
Perhaps one can ask this question: does a slippery consciousness not stand as the dualistic opposite of the hard, solid, homogenous stance of subjectivity? If that is indeed that case, it can be suggested that Yang Mao-Lin's “melting pot” serves as artistic representations of liquid subjectivity which, habitually associated with the qualities of fluidity and mobility, pass around solid obstacles and dissolve the solid mass with lightness.
Yang Mao-Lin's works have indeed accommodated different cultural and symbolic systems: the East and the West, the sacred and the profane, art and religion, the local and the global. More importantly, Yang's “melting pot” of these cultural-symbolic systems, which effectively erode the rigid boundaries which have once shaped our understanding of the universe, can be seen to illustrate the spirit of “liquid modernity” – a term which sociologist Zygmunt Bauman has coined to describe the present condition of the world as contrasted with the "solid" modernity that preceded it. According to Bauman, the passage from "solid" to "liquid" modernity has created a new and unprecedented setting for individual life pursuits, confronting individuals with a series of challenges never before encountered. Social forms and institutions no longer have enough time to solidify. In our time of liquid modernity marked by a redistribution and reallocation of modernity's 'melting powers', “interpreters and brokers [are] taking over most of the task previously reserved to the legislators”,1 and “life-politics” takes over public politics, critical theorists are having to adjust their role to become interpreters between different systems of perception in a bid to assist and promote autonomous communication between cooperating agents.
As Bauman describes, “From the meeting with solids they [liquids] emerge unscathed, while the solids they have met, if they stay solid, are changed – get moist or drenched.”2 Bauman's conceptualization of “liquid modernity” leads one to contemplate if the attacking force, the the clenched fist which was once aimed at the solid rock of political authority, will remain a rock solid, homogenous entity after all.
One may go on to ask further questions: is the solid still existent? If it is, then in what form does it exist in our current society? How does Yang Mao-Lin return to reality, once he has initiated into a full-blown fantasy and entered a different realm of reality?
For modern subjectivities, to evolve from solids to liquids is to strategically avoid direct confrontation and overt conflict with the rigidity of the inflexible, collectively-oriented order. It also allows for sufficient fluidity and dispersibility to infiltrate across the furrow boundaries of the system to plague it with endless waves of ecstasy. To conclude, I would like to quote Cobb from Inception again to help understand the fluid and mobile nature of “liquid subjectivity”: “You never remember the beginning of your dreams, do you? You just turn up in the middle of what's going on.” 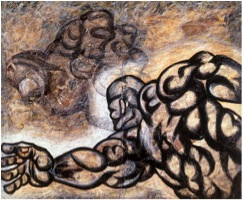 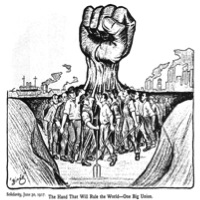